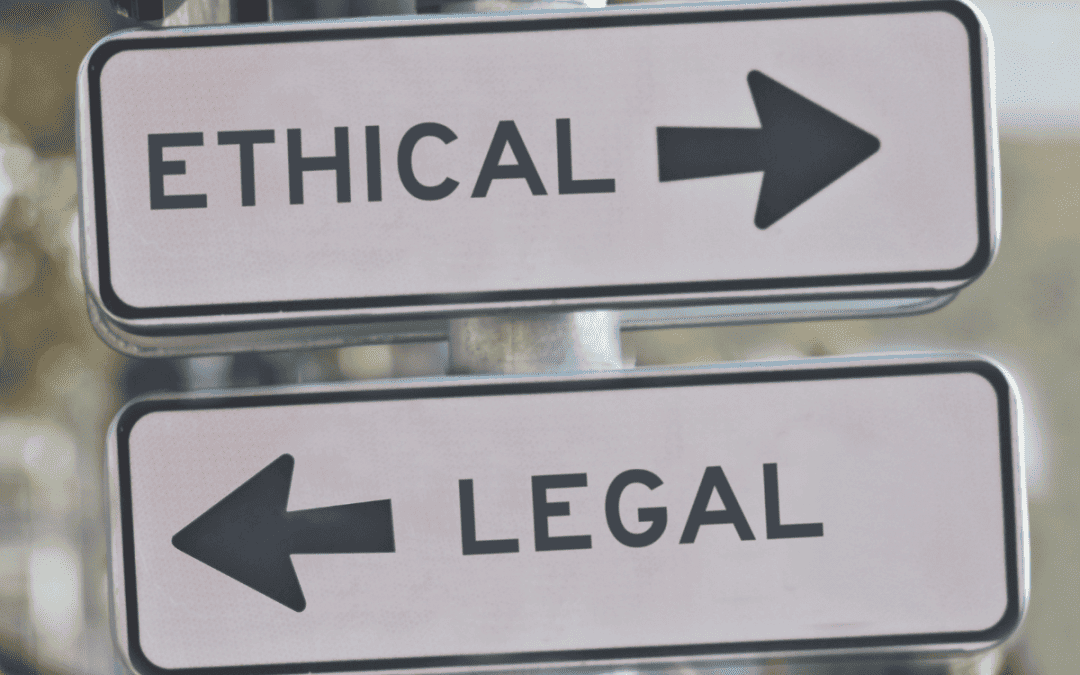 Very early in my career, I listed an acreage property, the home of an acquaintance of mine and his family. Sure enough, one day I got that fateful anonymous phone call in which the caller informed me that the seller had problems with their septic system freezing up in the cold Alberta winters. This was before caller ID and before property inspections became common.

Another time, about fifteen years ago, I had a home for sale in Edmonton, and we experienced one of those one-in-a-hundred-year rainfall events that caused basement flooding in many area homes. In their home, a small puddle of water appeared in one corner of the basement.

We all experience our share of these fun scenarios, and the tough question is always, what is the right thing to do ethically? Our legal obligations are clearer (though not always) than our ethical obligations.

The Real Estate Institute of Canada, in its superb ethics course REIC 2600, defines ethics as “the difference between what we have a right to do (legal) and the right thing to do (ethics).”

Knowing this, what do we do? What would you do? What did I do?

The answers are both easy and difficult. Many years have passed, and my memory is fading, but let me deal with the first scenario.

The easy answer is that we cannot withhold any information that could affect a sale. I had to discuss this situation with my client, and depending upon the instructions I received, I would have to decide if I could continue to represent them.

I have to tell you, as a young agent hungry for income, I badly wanted this to go away.

They expressed complete surprise at the allegation and were adamant they did not have any such problem. They had horses, so the several bales of straw in their backyard did not raise any doubts in my mind though I was wondering why they had arranged it as they did (more on this later).

In the end, I decided an anonymous phone call was not enough evidence to make a conclusion, I certainly was not an expert, and I had no reason not to believe my client.

An added factor I wasn’t aware of at the time is that it was likely a buyer-beware issue because, to a knowledgeable person, the arrangement of the bales would have been a dead giveaway (I only realized this long after in a blinding flash of the obvious).

I do not recall if the buyers ever expressed any issue after the sale, so I will never know the truth, but the arrangement of the bales was consistent with the less desirable situation.

In the second scenario, my clients also expressed surprise and said that in seventeen years, they had never had water issues.

This situation was compounded by two major factors: I was related to the clients, and if this was indeed a recurring issue, it probably constituted a material latent defect, which the clients and I legally had to disclose.

I found myself again in a no-win scenario and had to determine what to do. If the sellers were correct, disclosing this would improperly affect them negatively; if they were wrong, not disclosing would affect everyone negatively.

Like most agents, I had a lawyer I could call for a bit of free advice before deciding, which I did. I knew the clients well, and they had never once mentioned water in their basement, and we had just had a major rainstorm, so I again concluded that the most likely scenario was that this was likely due to the major flooding event.

I chose not to disclose.

A couple buyers’ agents did ask if there had been any water problems, and we are legally required to answer all questions honestly, which I did.

The home sold, passed inspection, and I never heard any more, so I am hopeful I made the correct decision.

I purposely chose these scenarios because sometimes non-disclosure is the correct response, but without sufficient evidence, the right thing to do is always to disclose.

Did I do well? What would you do?

Gerald has been a licensed real estate agent for thirty years and an industry instructor for over twenty. He has served on several committees with the Realtors Association of Edmonton and on the Board of the Real Estate Institute of Canada (REIC) Edmonton chapter. He is also an ethics instructor for REIC nationally and enjoys family, various sports, and the outdoors. Check out his popular real estate podcast The Real World of Real Estate here.