Opinion: The beginning of the end for rate hikes? 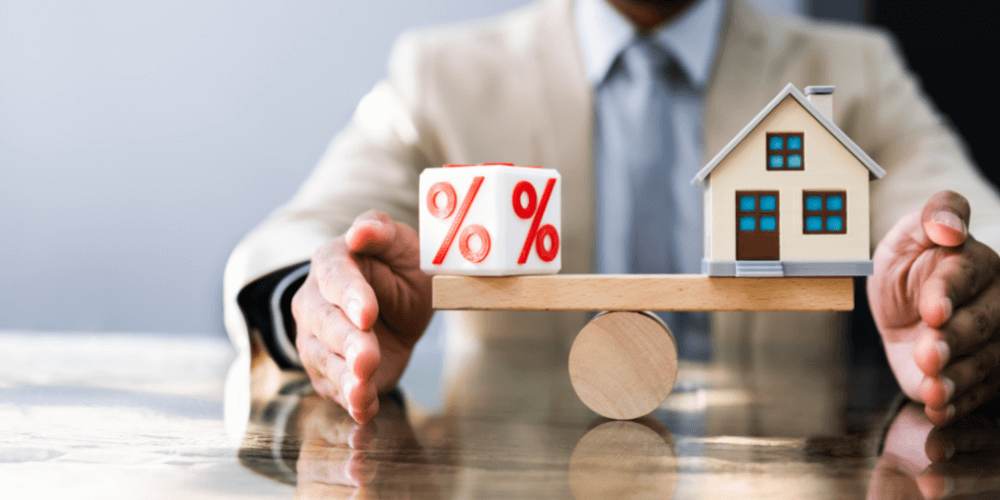 The Bank of Canada (BoC) has been leading the charge by global central banks in raising interest rates to tackle inflation.

Last week, it announced a 50-basis point (bps) increase which took the target rate to 3.75 per cent – well above its estimate of the “neutral” rate of two to three per cent. What attracted the most attention was not the potential impact of the rise but that it was “only” 50 bps rather than the 75 bps that was widely expected.

Was this the first sign of a central bank “pivot” away from recent rate increases? To some extent, the answer is yes. There are already significant signs of softening in the residential market and consumer expenditure, and we expect the Canadian economy to experience a moderate recession in early 2023. The BoC also now concedes that this is a possibility. We are not yet at the end of the road, but this is the first signal that we are approaching the peak for rates in Canada.

At Avison Young, we expect a further rise in December, but this time of only 25 bps – although the strength of the recent employment and wage growth data may merit one more 50-point increase. We anticipate this will be followed by a further (and, as things stand, probably final) 25 bps early next year. We then expect the BoC to hold rates constant until there are clear signs that inflation is on a firmly downward trajectory. Given that we expect inflation to moderate more quickly in Canada in 2023 than in many other countries, we would also expect the BoC to lead the other central banks in stabilizing and potentially starting to cut rates towards the latter part of next year. 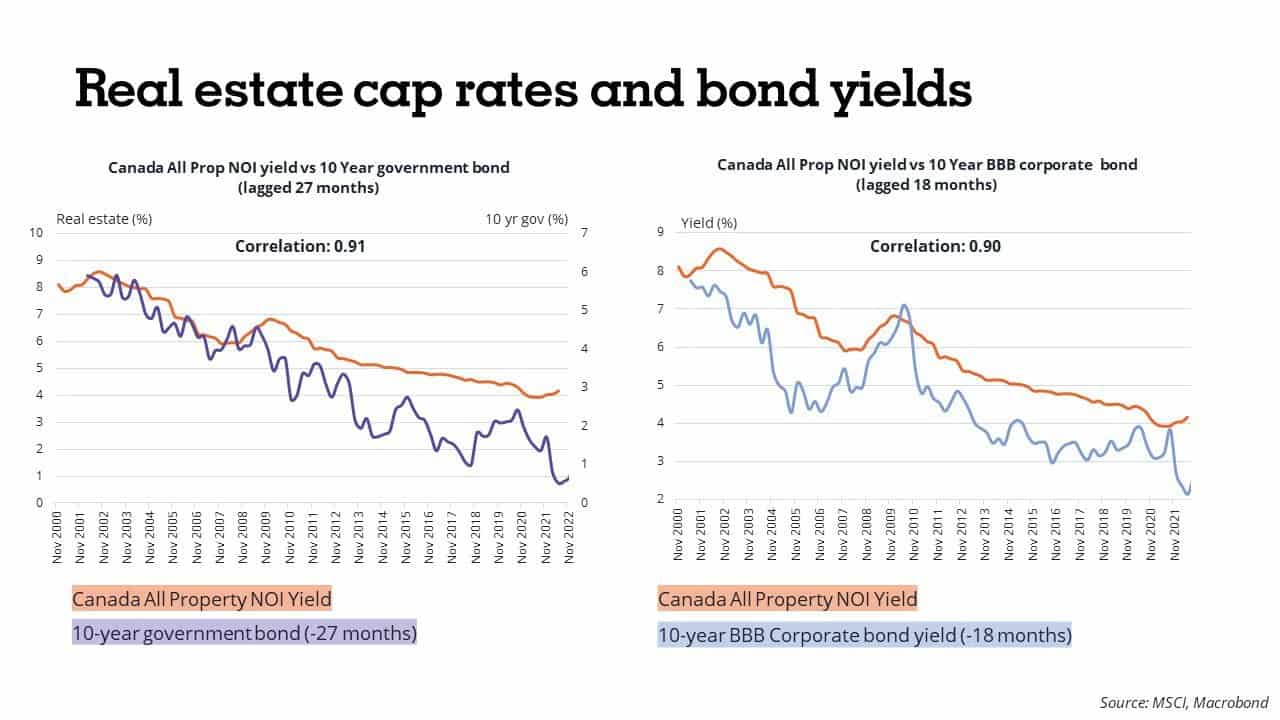 We will continue to see upward pressure on finance costs and the key bond yields that act as benchmarks for real estate pricing. Our analysis shows a strong correlation between real estate cap rates, long-term government bonds and BBB corporate bonds, but it takes one to two years for bond market pricing to be reflected in real estate values. Ten-year government bond yields are almost 300 bps higher than in 2020 and have been rising sharply for over 12 months. The equivalent BBB corporate bond yields, broadly representative of the tenant mix for good-quality real estate portfolios, have risen from around 2.5 per cent a year ago to almost six per cent today. This means real estate yields will come under increasing pressure in the coming months. 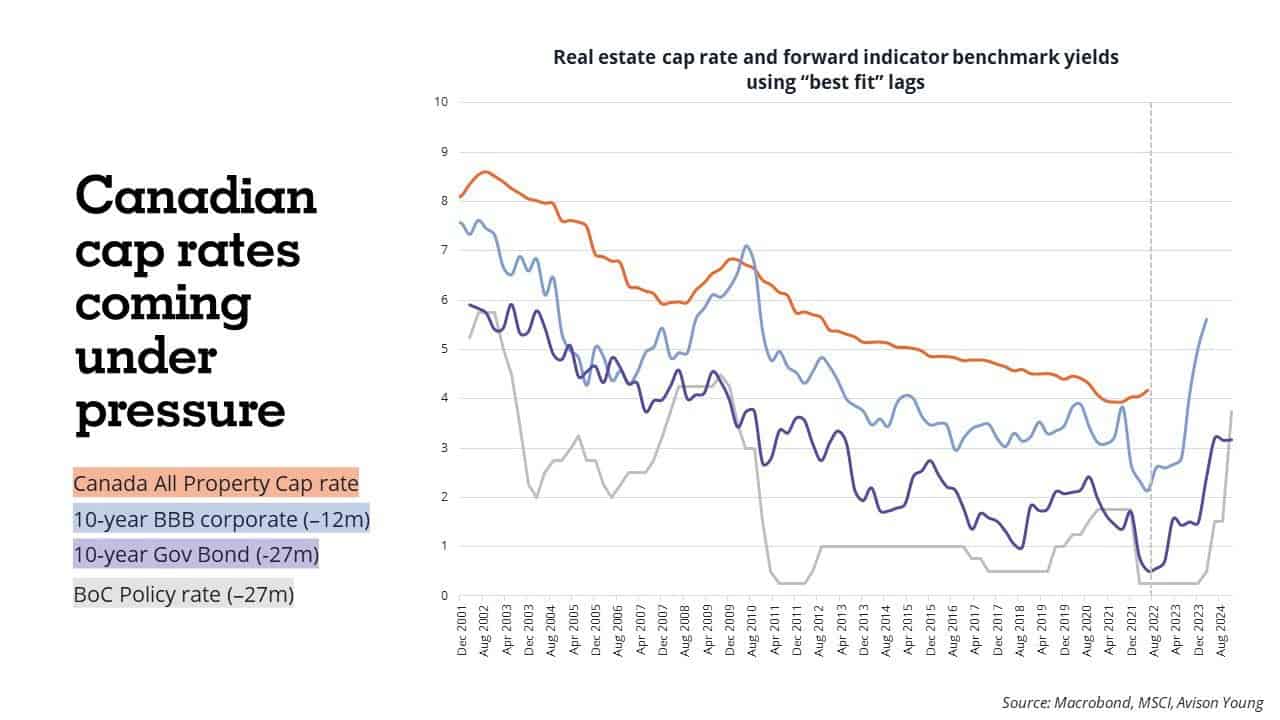 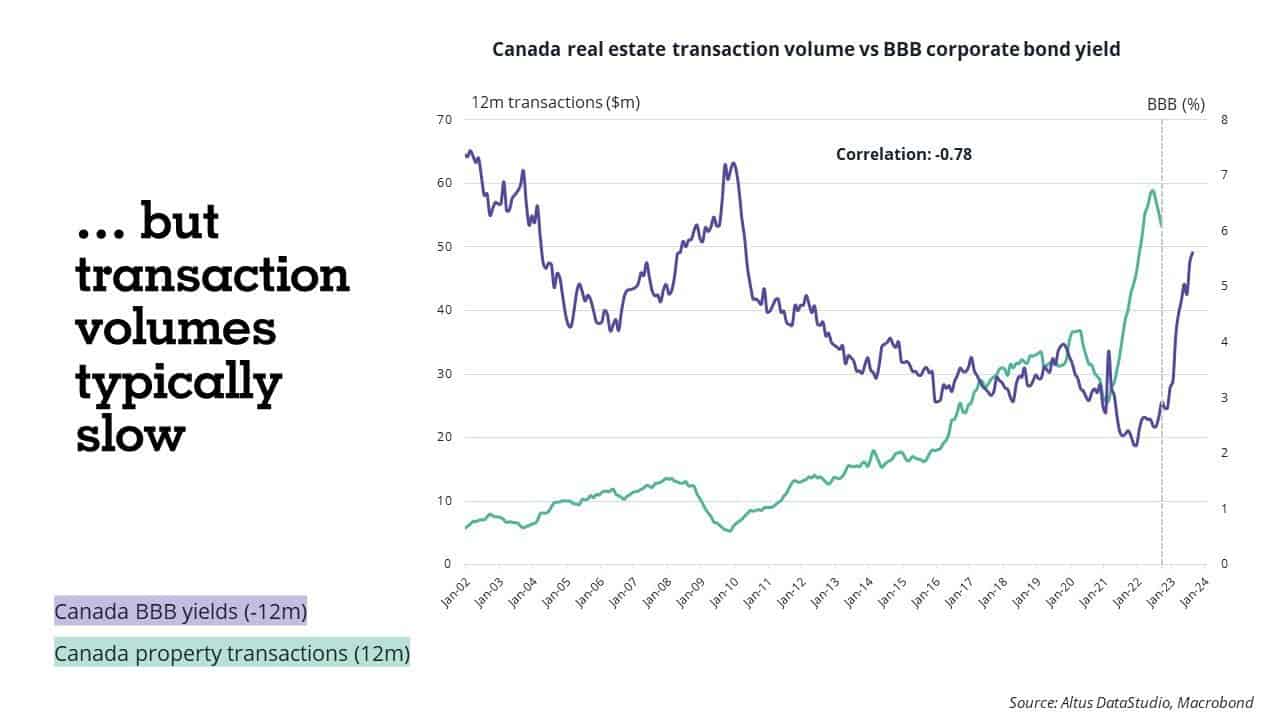 This is impacting the market, where many buyers are on the sidelines in anticipation of repricing, while owners are reluctant to sell in the face of weakening demand. A wider bid-ask spread, lower transaction volumes, and rising cap rates are the inevitable consequence, although this will take time to show up in the market data. That said, there remains significant capital looking to enter the market at the right price. Top-quality assets will continue to see healthy demand and thus be least impacted by repricing as pure-equity players take advantage of any price weakening.

The most significant impacts on values will be in secondary and tertiary areas; weakening occupier demand, a lower investor risk appetite, more restricted availability and the higher cost of debt, and elevated construction costs are all likely to contribute to significant repricing pressure.

Higher interest rates will make refinancing a challenge. While some distressed sales are likely, these will be limited in extent because lending standards have been higher in this cycle, and loan-to-value ratios lower, than in the run-up to the financial crisis. The relative health of the real economy and the relatively modest recession anticipated mean that most tenanted assets will remain income-producing, with the majority of lenders unlikely to force a sale into a weak market, even in the event of a technical breach of loan covenants.

While we expect interest rates to moderate as inflation subsides, we do not anticipate a return to the “era of cheap money” that characterized the decade prior to the pandemic. The return to more “normal” interest rates will create some turbulence over the next year, but it will be a period of opportunity for those bold enough to step in at the right time.

Nick Axford is Avison Young’s Chief Economist, having joined in July 2019 as Global Head of Research before being appointed to the company’s Global Executive Committee as Chief Economist in 2022. Based in London, UK, Nick is responsible for Avison Young’s global market analysis and thought leadership activities. He has over 30 years of experience in real estate research and consulting in the private sector, having led teams at the UK, European, Asia Pacific and global levels.