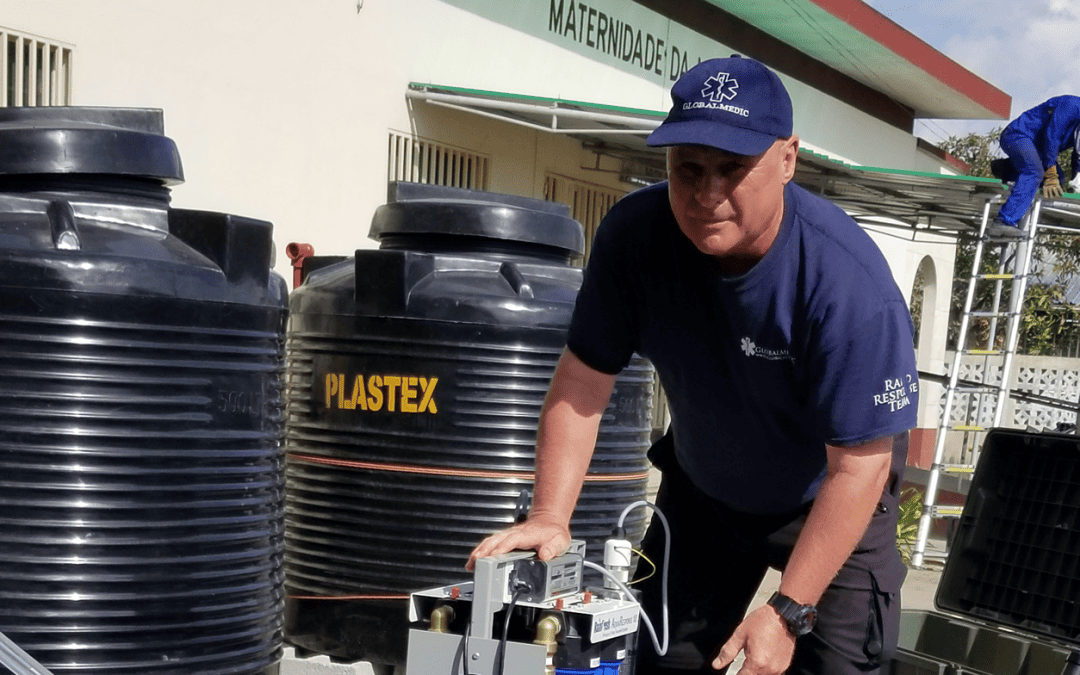 Some people live to help people, so when real estate agent Jack Turner of Re/Max Realtron Realty in Toronto discovered GlobalMedic, he was hooked.

Turner, who took time for this REM interview during a layover in Bangkok, was heading to the Philippines as part of a GlobalMedic team providing disaster relief following a flood.

The area is close to where he went on his first mission, to provide relief after a 2013 typhoon that affected 8,000 to 10,000 people. When the team arrived, what they saw was horrific – dead bodies in trees and on the road, he says. “It was tough.”

The team was tasked with providing water purification services. During that first mission, volunteers slept out in the open on a tile floor under a raised house instead of a hotel, in order to save the charity money. Volunteers expect to work hard and rough it, going where they are needed and doing what needs to be done in that particular situation, says Turner, who has responded to such disasters as typhoons, landslides and floods.

He says they stay in “zero star” hotels when not in the open air and with food provisions such as bread, peanut butter, canned tuna and sardines.

Turner says when volunteers see how much people need and “how much we can do….it’s easy to get enthusiastic.”

For Turner, GlobalMedic missions, real estate and work in a previous career as a Toronto fire fighter share similarities. “You don’t know what you’re getting into. You have to solve problems. In the fire department you get used to working with that mindset. It’s the same for GlobalMedic and real estate.”

GlobalMedic provides disaster relief on the fly, while its sister organization, GlobalFire, runs planned missions. Turner is also a member of the latter, which procures donations from first-world fire departments and delivers and trains personnel during two to three-week missions to less-privileged locations.

When volunteers who want to be deployed start with GlobalMedic, they take online training run by a disaster relief agency. Turner says participants find out what type of disasters they might be responding to, what to expect and what they might be doing. GlobalMedic provides training to set up equipment, such as water purifiers, and volunteers are coached about how to present themselves when representing the charity, he says.

During the pandemic when there were many flight cancellations, volunteers took on other tasks, such as working at GlobalMedic’s COVID-19 vaccine clinics. The organization also provided critical infrastructure tents to hospitals, hygiene and family kits for the most vulnerable, emergency food distribution when food banks were facing shortages and kits for First Nations communities.

GlobalMedic, which has provided disaster relief and life-saving humanitarian aid since 2002, has deployed Turner 10 or 12 times since he started volunteering with the organization.

Prior to this trip, he was deployed to Romania, working with a team to provide relief supplies, including food, clothing and diapers to Ukraine.

The David McAntony Gibson Foundation, which operates as GlobalMedic, is a registered Canadian charity founded by Toronto paramedic Rahul Singh in honour of his best friend, who died on Feb. 7, 1998. “Our mandate is to save lives by providing short-term, rapid response in the wake of disasters and crises, both at home and abroad,” the GlobalMedic website says. “Our motto is ‘Serving the Global Community’.”

Turner says, “Rahul has no off switch. His brain is running 24/7, figuring out how to do more and get more help.”

Another important aspect of the organization, the website says, is “….we strive at all times to live up to the standard of our namesake by being an efficient aid agency that delivers the maximum amount of aid with the minimum operating cost.”

True to their word, Turner says this charity ensures money is not wasted. That’s why about eight years ago he started donating part of his commission to the cause.

“Volunteers in the warehouse see how tight GlobalMedic is with pennies and all donations are spent so well,” he says.

Turner’s early career was in renovation and house services, but he says he says he realized the physically demanding work would not be sustainable. His brother is in sales and suggested he get his real estate licence. He did and worked with another company before joining Re/Max Realtron. He has won platinum and 100 per cent club awards for the last couple of years, selling residential and commercial real estate in the Greater Toronto Area.

His construction work taught him how to deal with people, a skill that comes in handy in real estate and his volunteer work. Turner has also worked as a firefighter with Toronto Fire Services, all work that is focused on helping people. “We provide relief to those who have lost everything,” he says. “It’s a good feeling to help.”

All of Turner’s careers are also about getting control of a bad situation and helping to solve problems, something being a Realtor is all about. Deals don’t always go smoothly and it helps to see the solution rather than panicking, he says. Like a boxing coach, he says, “my main job is to be the corner man and help people stay in the game.”

When he’s on a mission, a fellow real estate agent looks after his deals, and he returns the favour when his colleague is away. Technology has made it easier, with electronic signatures, for example. As for clients, Turner says they are understanding when they hear about the volunteer work that may take him out of town at a moment’s notice. Re/Max Realtron has also been “really helpful and supportive,” says Scarborough office-based Turner.

Not all volunteers want to be deployed. Turner says people of all ages help out at the warehouse, from nine-year-olds to teens to adults. “It’s a great way to meet people from all walks of life.”

Turner invites anyone who has questions to contact him directly by email at jackturner@ymail.com.