Wait, what’s that on my lawn? 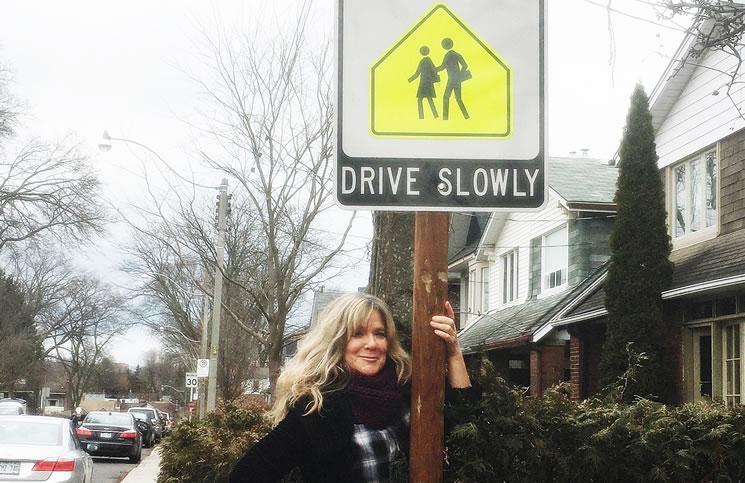 Opening my front door recently, I was greeted by several municipal workers digging a hole in the front lawn.

Many Canadian homeowners aren’t aware that there’s a portion of their property frontage, often the first metre or two in from the sidewalk, that is a city-owned right of way, allowing access for the installation and servicing of everything from sewer and electricity lines to utility poles, fire hydrants, traffic signage and more. This is a necessary fact of life.

As a homeowner, when you step outside to find a crew nonchalantly shoveling up your flowerbed – whether they are with the city or with a utility such as the local hydro, gas or telecommunications provider – the maxim “life is like a box of chocolates” embraced by Forrest Gump can begin to strike you as alarming. You never know what you’re going to get.

Or how it’s going to impact your property.

Turns out that what I got was a large fluorescent school safety zone sign topped by a brilliant yellow flashing light and solar panel. It may now be possible to find my house from space.

All kidding aside, it’s ugly and invasive but as installations go, I know it could be worse. The equipment that now blinks at me from 7 a.m. to 9 p.m. weekdays (including all holidays, as I discovered over the Christmas break) is an element of the international Vision Zero road safety plan, which aims to reduce traffic-related injuries and fatalities. Apparently Canada’s global world safety ranking is abysmal. How successful the program will be here is still to be determined, but it’s undeniably a worthy endeavour.

And yes, I live in a city (Toronto), so such infrastructure is part of the urban package. Planners and engineers determined that my lawn was the most visible and effective spot for this particular beacon. My home was tapped by the fickle finger of fate.

So maybe I should just accept it. But I couldn’t help wondering if those engineers considered that there are potential alternative locations on wholly city-owned property – a park – a mere stone’s throw away from me. (I’m told that often an effort is made to install infrastructure on public property where possible.)

Nor had the city given me a heads up about the installation, although when I complained about it – repeatedly – I was told that as per best practice, I was supposed to have received a letter in advance so that any concerns I had could be addressed then.

I don’t like surprises, especially ones which could potentially summon the mother ship.

More to the point, I had no idea whether this installation could impact my property value. I started doing research.

The particulars around infrastructure vary from municipality to municipality. But I quickly discovered that generally, unless there’s been an oversight, once any kind of installation is up, attempting to get it re-located can be a time-consuming and costly uphill battle, especially if you get a lawyer and various paid experts involved.

Residents can always contact the relevant city department or utility, and also their local city councillor or even the mayor. Councillors don’t have full control over these decisions, but they can “advocate on behalf of residents,” says Toronto City Councillor Brad Bradford, who represents my ward.

“We have a lot of these conversations,” says Bradford’s chief of staff, Rishab Mehan. “We want to make sure that residents’ concerns aren’t ignored.”

In Toronto, in terms of such issues as keeping streetscapes uncluttered, hydro and the various other utilities often don’t work together with the city and transportation department, to ensure that – for instance – utility space is shared so that two poles aren’t erected where one would suffice.

“We aren’t there yet,” says Mehan.

Sure enough, my research turned up no shortage of opinion pieces by people increasingly dismayed at the visual clutter of the streetscapes created by duplicate utility poles, oversized and excessive signage and countless other factors.

Asked what a homeowner’s responsibilities are regarding disclosure when selling a property with an unusual installation situation, such as when equipment servicing on a right of way regularly becomes intrusive, Bradford says he would “encourage maximum disclosure wherever possible,” and get legal advice.

He’s cautious when asked whether installations can on occasion negatively impact property values, responding, “Every home sale is unique, so different potential buyers might have different views on how installations affect values.”

But there can be positives too. For instance, a fire hydrant on your lawn can translate into lower home insurance premiums, and quicker access for emergency fire services. And “in general, measures that improve neighbourhoods, like road safety initiatives” can be good for home values, Bradford says.

Digging deeper, I reached out to the City of Toronto’s communications office in hopes of speaking with a city planner with comprehensive installation/infrastructure knowledge. I was told: “Each city sign or piece of equipment that is installed in the public right of way has its own considerations. There are also various utility companies, agencies and even city divisions that install a broad range of different signs and utilities. So I’m afraid it’s difficult to get one person to speak about all of them.”

I never did manage to get across the message that that wasn’t the point of my article. I went down the rabbit hole of bureaucracy, complying with the city’s repeated polite requests for clarifications of clarifications of questions, an endless tunnel of infinity mirrors. It did me in. I turned elsewhere for answers.

Enter Barry Lebow, a sales rep with Re/Max Ultimate in Toronto who as an expert witness specializes in litigation relating to real estate agency and stigma, including anything that can potentially detract from a property’s value.

In his experience, trying to prove that an installation devalues your property is a fight that’s stacked against the homeowner. As a result, efforts to get compensation or reduced property taxes will likely end in disappointment.

“I don’t know of any studies around it,” he says. “No one has ever been able to prove that it takes away from value. Most of these fights go nowhere. It’s you against a government authority… You don’t have deep enough pockets.”

The good news is that in Lebow’s experience, commonplace installations like hydrants and signage don’t generally impact property values negatively. (The exceptions are “extreme installations,” he says.) Most homeowners stop seeing standard installations and learn to live with them, especially in cities, where out of necessity tolerance for them is higher than in suburbs and rural areas.

Market conditions factor in too, Lebow says. “In a buoyant market like now, people are just happy to get in. Small problems are negated.”

There’s always the option of resorting to camouflage (although not with items like hydrants, which must be kept clear). Lebow had clients with a massive hydro box on their front lawn. They called the utility and discovered that although they weren’t allowed to put a hedge around it, bedding plants were permitted, with the stipulation that the utility could dig them up when servicing the box.

Unfortunately plants aren’t going to help with my flashing beacon. But all is not lost. I still have a shot at getting it moved.

“The ‘squeaky wheel gets the oil’ theory can work,” says Lebow. “They’ll want to get rid of you.”

In other words, I could try annoying people until they give in. At last, a challenge for which I am ideally suited.