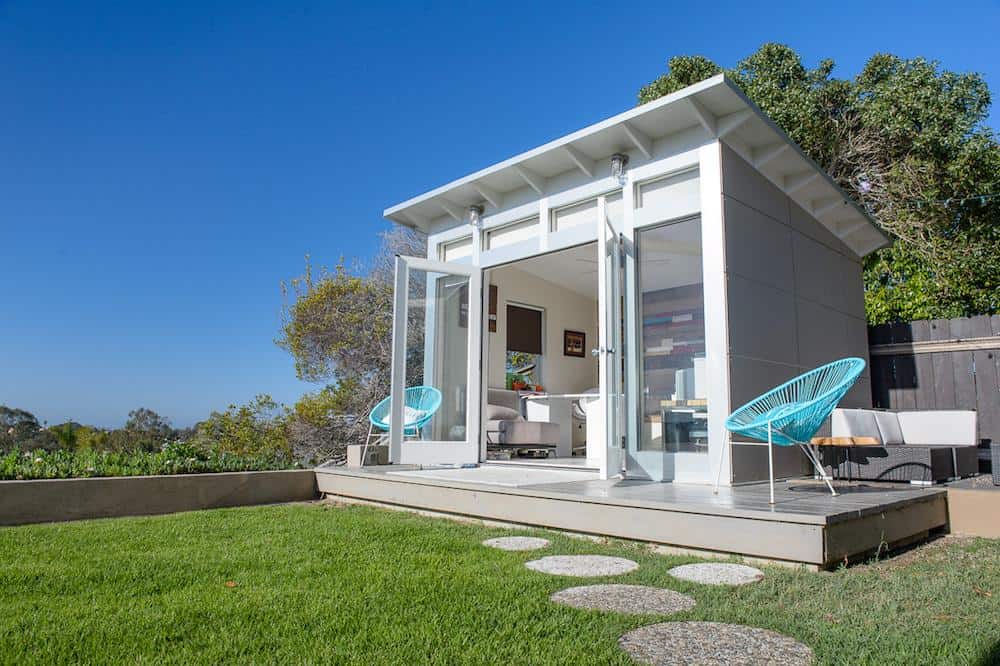 In a tight real estate market, buyers may have to settle for a home that’s not perfect – it may not have enough bedrooms or a home office, says Jeremy Nova. Or homeowners’ existing houses may not have the extra space they crave. The good news is your clients don’t have to make do. Studio Shed, a full-service design-build firm based in Boulder, Colorado, creates accessory dwelling units (ADU) and flat ships them so homeowners can build them themselves or have their own contractors erect them.

The units range from single rooms to suites that include kitchens and bathrooms.

As the saying goes, necessity is the mother of invention. For Nova, an Olympic mountain bike racer with 15 U.S. National Championship titles, that necessity was a place to store the 20 mountain bikes that he and his wife own. So in 2016, Nova decided to build a cool storage shed for his own use. Fellow mountain bike racer Mike Koenig liked what he saw and copied the design but turned his space into a home office.

Although starting a business wasn’t their initial intention, Nova, an honours graduate of the University of Colorado’s College of Engineering and Koenig, a graduate of the University of Denver School of Business and an experienced entrepreneur, created Studio Shed. Nova is the founder/creative director and Koenig is president/co-founder. They incorporated in 2008 and opened their manufacturing facility in 2012. They broadened their product offering from single room to turnkey accessory spaces with customers throughout the United States. Then the pandemic hit, accelerating demand as people longed for more space at home. Sales increased 150 per cent from previous years.

This summer, Studio Shed announced its expansion into Canada as a result of demand from north of the border, Nova says. Parts are shipped on two pallets, flat packaged and easily carried by two people (no cranes are required). In the U.S. they are built by a network of installers. Nova says the company is currently setting up an installer network in Canada. It is expected to be available in mid-2022.

“Bringing Studio Shed products to more regions has always been a priority for us. We are thrilled to officially launch in Canada (Toronto, Vancouver and Ottawa to start), especially as more provinces, states and local jurisdictions embrace the permitting and construction of these types of structures,” Nova says in a news release issued earlier this year.

With easy installation, a simplified permitting and construction process, hundreds of customizable options and lower costs compared to traditional home renovations, the company has created an efficient and affordable way to deliver backyard products.

“ADUs are in high demand right now and they are a key feature of the post-pandemic home,” says Nova. “We have seen a continued demand for larger, more flexible spaces – whether it’s a place for guests or family, a source of income as a short or long-term rental, or simply a flex space fully outfitted with plumbing and electricity to use as a home office or gym space. An ADU is a simpler way to add living space than a traditional home addition.”

The Studio Shed website lets customers use a 3D system to create their dream backyard space from the ground up, choosing size, interior and exterior layout and finishings. A customer experience team is available to help.

Nova suggests homeowners first do due diligence by contacting their local building department to see if ADUs are permitted. Many municipalities allow smaller one-room units, but generally the addition of plumbing triggers a more detailed permit process. A fully plumbed studio may not be allowed in certain areas. Other considerations are setbacks from the property line to ensure there is enough space to legally build on the property, as well as allowed lot coverage.

Once the design is complete, the company will provide an estimate and can also create an engineered plan for the building department for approvals. (In the U.S., 120-square-foot ADUs can generally be built without a permit.)

It’s up to the homeowner/contractor to create the foundation. ADUs larger than 10×16 feet require a concrete foundation, while smaller units can be placed on post-and-pier foundations.

The ADUs can also be constructed on raw land for use as cottages. For colder climates, the standard insulation package may need to be adjusted.

Nova says the addition of ADUs has shown to be one of the highest returns on investment.