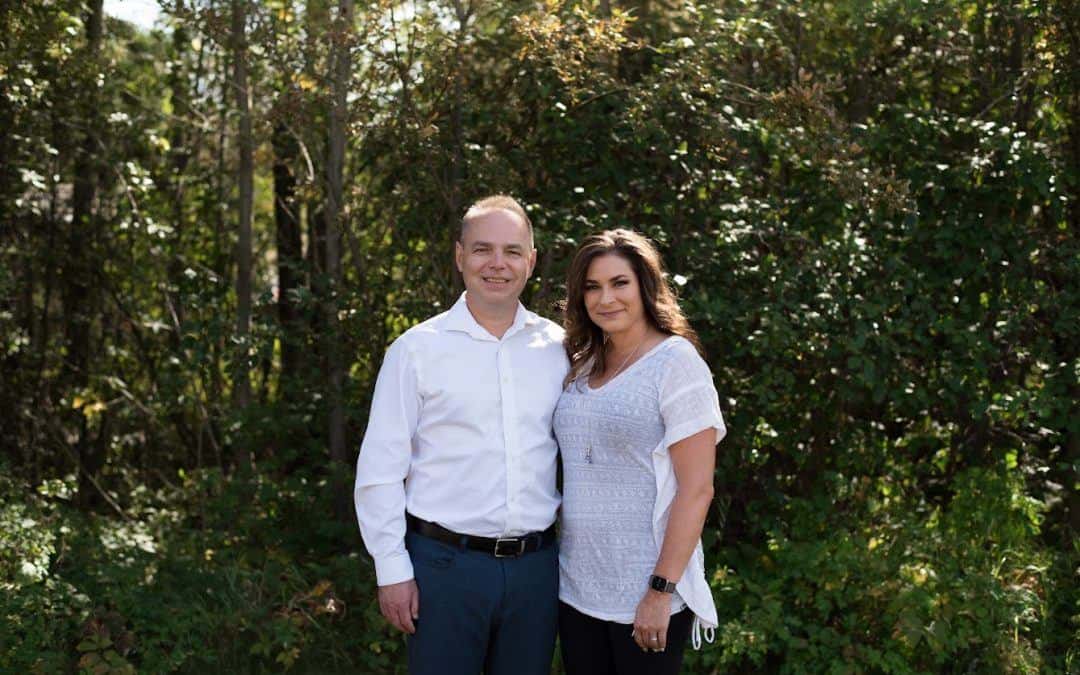 Over the 17 years that John and Rachelle Dempster have been realtors in their hometown of Drayton Valley, Alberta, they’ve felt a distinct lack of a full-service brokerage in their small community of 20,000, “Where a broker is a full-time broker, not one that sells and tries to do both jobs,” says John Dempster.

So, in June 2022, the couple decided to fill this gap by purchasing Re/Max Vision Realty from Heather Malin. While the former owner continues to serve as an associate broker with the team, John Dempster has taken over the company’s reins as owner and realtor. Rachelle Dempster has devoted herself to becoming a full-time broker. The majority of Rachelle’s time involves mentoring and training younger realtors, “It was a natural next step… a lot of realtors have come to us over the years, looking for advice from senior realtors like ourselves,” says John.

In 2005, when Rachelle became certified, she walked into a “hot” real estate market “where people were moving from the eastern provinces to Drayton Valley, literally coming in with U-Hauls filled with furniture and trying to find a place to live,” says John. At the time, he says there were only a handful of houses to choose from, forcing multiple offers on a single property. “We had people pulling into the parking lot and saying, ‘We need a place to live.'” This prompted John to follow suit and join Rachelle—once his high-school sweetheart, now wife—in building their real estate careers while growing their own family.

When the price of oil crashed in the mid-2010s, Drayton Valley’s real estate market suffered a significant downturn. “We were hit very hard, not only in pricing, but jobs were lost, folks were being laid off, and there was an exodus. People were selling houses for a hundred to $120,000 below what they had paid; there were foreclosures. It was a challenging time for us in this area,” says John, choking back tears when reminiscing about some of his close friends and clients. Both John and Rachelle felt helpless at the time. The community they cared for was turning to them, and they were limited by how much they could help.

With a strong faith in their church, John and Rachelle knew they would ride the hard times and come out on the other side. But they also knew that something had to change in the way real estate businesses operated in their community. “We love this community. We wanted to dig our roots even deeper. We raised our family here, and now we had an opportunity to not only be business owners, but leaders,” says John.

With Re/Max Vision Realty, John and Rachelle Dempster are building a “people first” culture, where the bottom line is not about money but the humans they’re serving and the real estate agents who work for them.

“We want to celebrate productivity and top producers, but we also believe in celebrating humanity and the small wins,” says John. “We celebrate if someone has had a tough deal or had to exercise particular care and patience with a client. Our culture is one of encouragement. Not every realtor can be a top producer, but if they’re great at working with senior citizens, we’ll encourage them in that area because we can see it even if they might not see it,” he adds. Rachelle chimes in, “If they’re great with first-time home buyers, we will play to that skill and pull that forward in them. We really want to shine a light on their strengths. That’s our culture,”

Their company awards an “Unsung Hero” award to realtors who peers nominate for going over and above for their clients and employers. Over the past two years, Drayton Valley’s real estate market has picked up steam, and so has the Dempsters’ family business, making them owners of the majority market share.

In 2021, John was awarded Realtor of the Year by the Realtors Association of Edmonton (RAE). He’s been in the top 5% in sales with RAE for the past three years. And so far, in 2022, John has completed
more than one hundred successful transactions.

While John attributes his success to Rachelle, Rachelle opines that “to say that the award is well-deserved is not giving him the credence that he deserves because it’s almost too hard to put into words.” She adds, “This
award is typically given to someone who is in the city. The fact that John’s in small town, rural Alberta, and has received that recognition is not lost on us.”

Today, John and Rachelle’s family-run team at Re/Max Vision Realty includes their daughter and son-in-law, who share their people-first approach, where it’s not about the numbers but the humans behind the numbers.