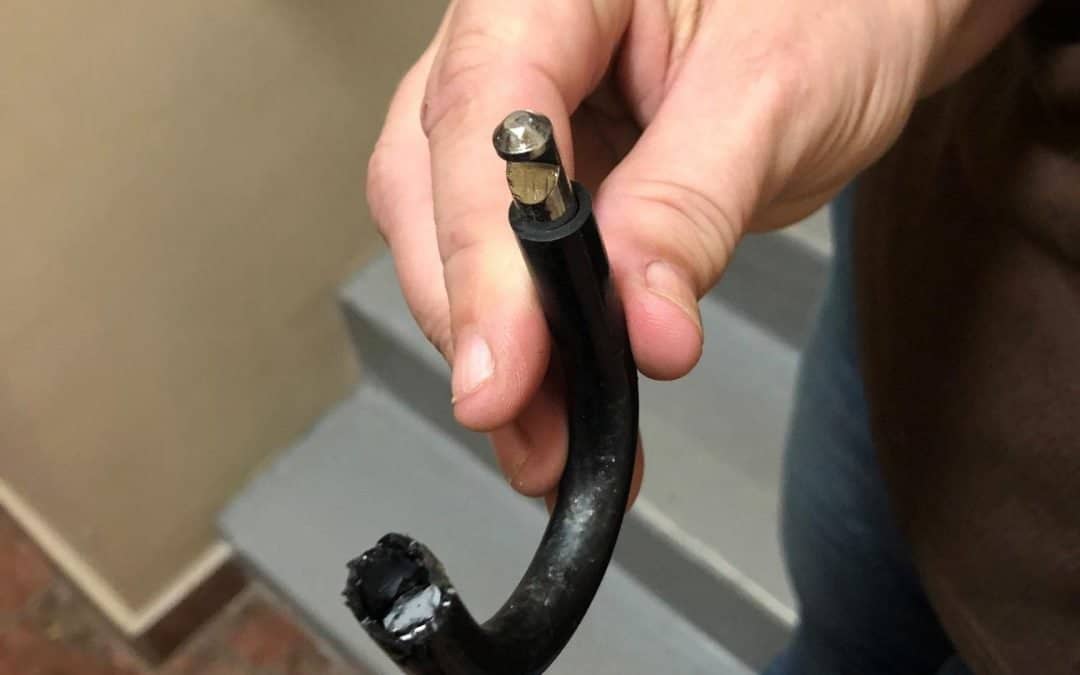 Who’s vandalizing and stealing lockboxes in Hamilton? That’s the question on the minds of some real estate sales representatives in the Steel City.

This, after at least four lockboxes went missing from outside a downtown condo building in early June.

The problem came to light after an agent with a client arrived at a condo for a showing and couldn’t find the lockbox.

The listing agent, Cindy Cloutier of Heritage Realty in Waterdown, Ont., was contacted, and reacted with disbelief. “In 18 years I’ve never had this happen,” Cloutier told REM.

When she was shown an image that confirmed her lockbox, as well as “four or five others” that were affixed to the same railing were gone, she took quick action.

She alerted her client, who in turn called building management to determine whether they may have removed the lockboxes (they hadn’t). Cloutier ensured the homeowner’s door was re-keyed. She also called the police and informed other Realtors of her experience on an electronic message board.

Cloutier said a spokesperson with the condominium corporation told her that lockbox theft is happening “all over the city right now.”

A spokesperson with the Hamilton Police Service was unable to confirm how many reports of lockbox thefts they’ve received.  It’s also not known whether any thieves actually managed to gain access to any of the condos using a key from one of the lock boxes.

Whoever did this put a lot of thought into it, says Rob Golfi, team leader at Re/Max Escarpment Golfi Realty. “It’s not easy to cut those (lockboxes) off…”

“My theory is who is doing this has looked at condo properties with a Realtor or has a Realtor friend and they saw an opportunity for themselves to break and enter into homes with a key,” he says.

The railing from which several lockboxes were removed.

Unfortunately, security cameras weren’t able to capture what happened at the condo of Cloutier’s client because the railing was too close to the building to detect any movement.

As Golfi points out, even if the security cameras did capture a lockbox break-in, it could be hard to identify the culprit these days. Everyone is wearing a mask due to COVID-19 and if you add sunglasses and a cap, they’re well obscured.

So how can sales reps reduce the risk of lockbox theft? Golfi says they could start by removing lockboxes after a deal is completed. Too often, he says, 10 or 20 of the gadgets can be seen bunched up on one railing.

Cloutier says as soon as a property sells, she immediately changes the code of the lockbox so that all the people who’ve been through the home no longer have access.

“Everyone should do that. The only one to have the new code would be the agent for the buyer. A lot of people leave the box on and carry on. Why not put a new one on or change the code? That’s really important,” she says.

Sometimes agents have come up with other solutions. Golfi says one agent approached him about hanging her lockbox outside his office, so it would not be on display directly outside the property that is for sale. But he says that can be inconvenient for the agent and the client and that it’s not always possible to find an alternate location.

Golfi says the safest method, at least for condominiums, is to have a lockbox on the unit door, instead of outside the building. This would require the superintendent to open the front door of the building to let the agent and buyer in.  “Superintendents don’t like it but it’s probably the best way,” he says, adding that buildings with concierges are also good because the key can be left securely with the attendant.

Cloutier, meanwhile, has since sold her client’s Hamilton condo. But she didn’t install another lockbox. “We found an alternative,” she says. “The client has a keypad on her entry door, so they’d have to ring her unit and she could let them in on her phone and they got a keypad instead of a key.”

After her previous experience Cloutier is extra cautious. “I wouldn’t leave another lockbox out there.”