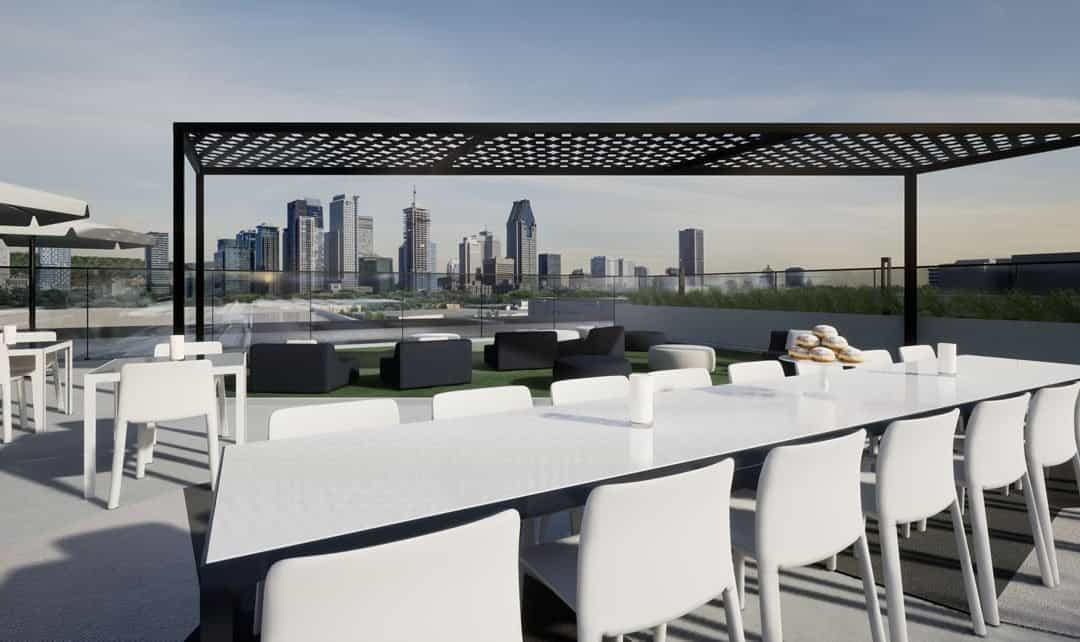 McGill Real Estate in Montreal recently introduced a new way to sell condominiums by using a large-screen immersive experience to show projects that have yet to break ground.

The system allows clients viewing a large screen at a sales centre to see exactly what their yet-to-be-built condo will look like without having to wear isolating virtual reality goggles or headsets. Clients can visit every room in each condo unit and all the common spaces in the building.

“It’s a much more interactive, flexible way to present (to) the client what their future home will look like,” says Debby Doktorczyk, co-owner and president of McGill Real Estate. She and partner Patrice Groleau are also the owners of the Engel & Völkers shop in Montreal.

“We think we’ll reach more clients – people who were uncertain about buying from plans,” Doktorczyk says.

McGill Real Estate is using the system to sell Charlotte Condos Société, a new 243-unit condo development along the Lachine Canal in Griffintown, near downtown Montreal. Construction of Charlotte should begin late this year or early next year with the project completed in 2020.

McGill has exclusive use of the system in Quebec for its developer clients.

“You can continue to talk to the client,” Doktorczyk says. “It removes the mask that we had before” with VR, in which only one person at a time could have an immersive experience.

Instead, 15 people together in a room at the Charlotte sales centre can watch what their potential condo looks like at the same time. “Everyone has the same reaction – it’s wow,” Doktorczyk says.

Potential buyers can move freely around throughout the condo, all at a touch of a button on a tablet. Clients can also visualize different finishing options (such as kitchen cabinets and counters and flooring) and have PDFs of their choices emailed to them.

The immersive system is “not necessary” in order to sell condos, Doktorczyk says, “but it’s so amazing, why would we not want to have it?” She believes it will enable brokers to sell to people who could not previously visualize what their unfinished units would look like, she says.

While some potential buyers want to see the finished product and not floor plans, in the hot Montreal market projects are selling out before they’re completed, so these buyers miss out. “I believe it’s also going to attract younger clients who want to have something funky and new,” she adds.

The technology uses 4K resolution and the sound, images, smoothness and the overall experience is cohesive, says Thomas Soetens, CEO and co-founder of Immersive Design Studios. “It doesn’t feel like you’re operating technology. That’s really important when you do a sale. You do not want to be struggling with features or over-convoluted technology.”

The technology is user friendly and brokers can learn to manipulate the tablet that controls the systems in an hour or two or just use the auto pilot function.

Drones were used to capture images of the city skyline and surrounding views of the condo development. A competitor’s planned condo development nearby was also included to add to the realism, as were sounds of birds and street noise.

The Charlotte project is using a small 16-foot version of the screen but 20, 25 and 40-foot screens are also available.

The system is not available online and is meant to be used as a sales tool in sales centres, with brokers providing complementary information to potential buyers.

When you’re in a dark screening room, “you really feel like you’re inside the project,” Doktorczyk says. It’s an experience that can’t be equalled on an iPad.

“The purpose is to take the pain out of the real estate visit and to make it a pleasurable experience that is comparable to anything that good entertainment would bring you,” says Soetens. “It should be fun to do this. It should not be a drag to see your future apartment.”

The hardware can be reused for other projects, making it “a whole new way of selling real estate,” says Kora Van den Bulcke, president and co-founder of Immersive Design Studios.

Doktorczyk would not divulge the cost for the system but said it is not high and replaces other marketing tools, such as visuals made by graphic designers.

Immersive Design Studios is using the system for the $3-billion One Vanderbilt, next to Grand Central Station, which is the biggest office tower currently under construction in New York City. It’s also being used at a residential real estate project in Mumbai, India as well as at the Bell Centre in Montreal.

Soetens is bringing the system to developers in Toronto and Vancouver and hopes it may become an industry standard in a few years. “In Vancouver, we see (developers) spend between $2 million and $7 million on a sales centre,” he says. “We’re not even close to that. “So, it’s attractive to them.”