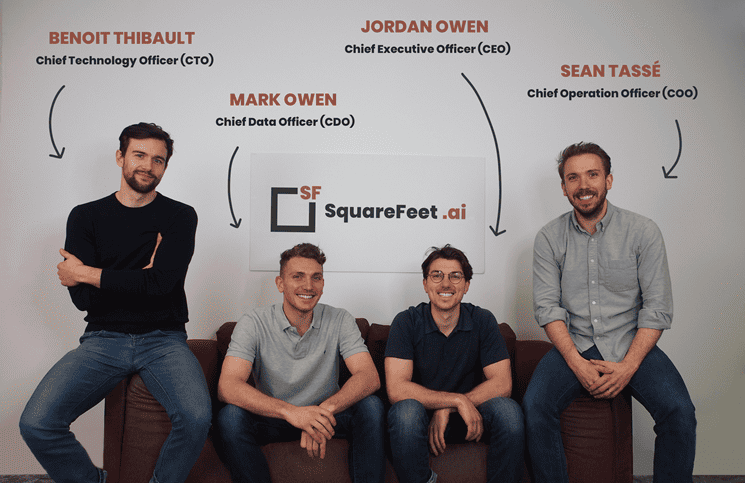 In March 2020, like many hit hard by the pandemic in Quebec’s construction industry, Sean Tassé found himself unemployed as the province entered its first three-week lockdown. Then 28, Tassé says, “I was at home and thinking, this doesn’t make sense. I am fully educated and motivated and I can do anything to help.” At that point, Canada was weeks behind in pandemic preparedness compared to Asia. Quickly, Tassé realised that “we’re going to have to use masks to be able to fight this disease.”

Before that lockdown, he specialized as a project manager in residential construction for Mondev, a Montreal-based real estate development firm. As part of the Mondev team, Tassé worked closely with brothers Jordan Owen, 26 and Mark Owen, 28, whose father owned the company. The three struck up a friendship outside work that led Tassé directly back to Jordan, mid-lockdown, with a business pitch to start a company making reusable masks.

Jordan had just returned home to Montreal after his post-graduate program at the Massachusetts Institute of Technology (MIT) cancelled classes and pivoted to online learning. He immediately jumped at Tassé’s idea. With Mark joining the team, they took the pandemic by its horns and launched Bien Aller, a company monikered after Quebec’s COVID catchphrase “Ça va bien aller.” (It’s going to be fine.)  Soon, Bien Aller became the first company to sell reusable masks in Quebec. Within three months, it sold over 250,000 masks across Canada and the United States.

As soon as Bien Aller started helping save lives and generating profits, the trio turned their sights to fix a problem in real estate development that had long irked them. “The problem in the industry is that new residential developments or developers have a hard time efficiently determining the pricing of their units,” says Tassé.

The team used artificial intelligence (AI) algorithms to do away with traditional, more unscientific ways of pricing units, and replace them with a rigorous data-driven approach to fixing the price of a condo unit.

Last June, the trio invited a fourth friend, Benoit Thibeault, and cofounded and incorporated Squarefeet.ai. By September, the startup had launched its online platform that “got great traction from the (real estate) industry,” says Tassé.

With Realtors positioned as the end-users of their technology, Squarefeet.ai “allows them to be able to get the maximum revenue for the developer and it’s going to allow them to differentiate themselves from other Realtors, because they’re backed by AI-driven decisions. This is huge for them because now they have a tool that allows them to be better than the competition,” says Tassé. Ongoing discussions with companies such as Baker Real Estate and JLL have further reinforced Squarefeet.ai’s claims.

“Real estate is a highly driven data industry but at the moment, there are very few solutions that allow us to utilize that data, to (deliver) data-driven solutions. Those data-driven decisions are going to separate the developers that have huge success and the ones that have less. Technology is going to have to be implemented in this industry to be able to keep up with the rest of our lives,” says Tassé, especially in the context of how life and work have changed due to the pandemic.

Data-driven decisions will eventually pave the path for better-designed units, he says, because “we’re going to be able to quantify what works and what the people want to have as units, which ones are the most successful on the market, which are going to allow the developer to create better buildings and maybe eventually cities that are more catered to the need of its different citizens.”

By the end of 2021, the company aims to release the first version of its technology to “cater to the existing stock of real estate” within Quebec, while planning to expand the product’s reach to the rest of Canada thereafter.

Bootstrapped by ongoing earnings from Bien Aller and with venture funds raised through various business and startup accelerator programs, Squarefeet.ai is poised to establish its foothold within a futuristic vision to help the real estate industry evolve into “something that’s more refined than what it is right now,” says Tassé.