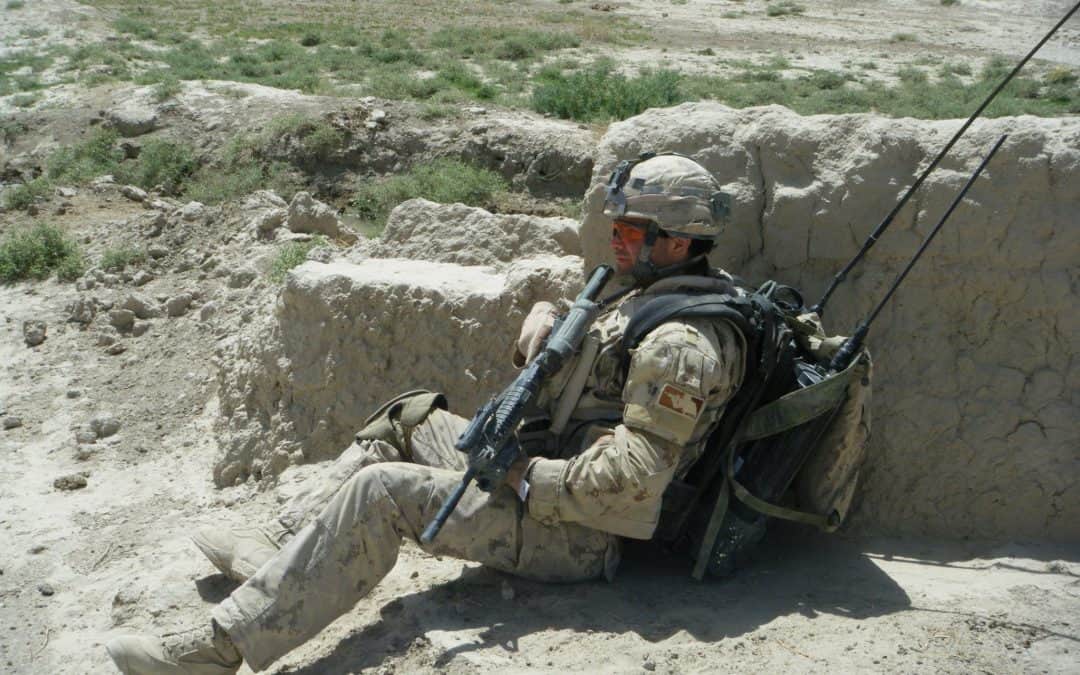 He and his army reserve unit used to do a fairly big ceremony at a local cenotaph every November 11. “But not this year or last,” Richardson says. With the coronavirus still a concern in southeastern Ontario’s Waterloo region where he lives and works, this year’s event was held in-house at an armory and wasn’t open to the public.

Richardson, a sales rep with Royal LePage Crown Realty Services in Cambridge, takes this in stride. But it seems his colleagues really miss the annual opportunity to see him in a kilt.

Says Richardson’s broker, Angela Asadoorian: “Every November 11 many of us from the office would go to the cenotaph together. Part of the charm of that day is seeing Mark with his regiment in his full Royal Highland Fusiliers of Canada ensemble.”

It doesn’t look it, but the attire is actually quite comfortable, he says, “as long as the kilt is not too tight.”

When the occasion calls for it, Richardson has been donning this uniform since joining the army reserve right out of high school in 2005. He quickly discovered that a lot of what he’d seen in the movies about the military was inaccurate. But not all of it.

Sleep deprivation? Getting yelled at? Surprise inspections in the middle of the night? Running 10 km with a heavy backpack? Yes, all true, says Richardson.

Still, a career with the armed forces is not for everyone. “It’s a mindset,” says Richardson. “The lack of sleep, the pace, pushes you to your limit. You have to be able to function.”

Over the years he’s worked his way up to the rank of captain, and also earned a master’s degree in political science from the University of Waterloo.

In 2010 he deployed to Afghanistan (as a reservist attached to regular unit) for a tour of seven months, part of a NATO-initiated task force helping to train and mentor Afghan troops.

The pace was unpredictable and the heat was soul sucking. There were plenty of slow periods, along with stressful stretches doing tasks such as patrolling in armored vehicles and, you know, getting shot down in a flaming helicopter. Richardson had neglected to mention the helicopter incident to me during our interview for this article. I learned about it later via an old item in his local newspaper. Pretty much all he’d told me was that he’d spent a lot of time in Afghanistan “reading magazines.” (Apparently his broker wasn’t kidding when she described him as humble.)

Despite being on edge throughout the tour, Richardson says he felt relatively safe in Afghanistan at the time.

“I had trained and knew what to expect. But my parents didn’t. One of the hardest parts of being there was knowing that it was causing my parents stress.” This summer he got married, and he anticipates that his wife will have plenty to say if there is any talk of future dangerous assignments.

Being stationed in the high Arctic training and working with the Inuit was another mission that stuck with him. “There, it can be nearly pitch dark all the time. I wasn’t used to that,” he says. It was brutally cold as well. “We were travelling by snowmobile, with blocks of water for drinking.”

One day he was directed to the tent of an officer who was supposed to assist him with activity planning. When he got there, he announced himself from outside. She told him to give her a few minutes. He stood in the cold for quite awhile.

When he eventually was allowed inside, he saw that she was set up with a heater, a cook stove and an iPad. The latter was the reason he’d been left in the cold – she was finishing up a computer game.

“I wouldn’t have pictured that,” he says. “We were on the frozen ocean.”

About seven years ago, having invested in a few properties, he decided to become a Realtor. With time commitments in the army reserve not being onerous (generally one evening a week plus maybe one weekend a month, unless providing longer-term support within the regular force), Richardson hasn’t found it overly challenging to balance the two endeavours.

“The reserve is voluntary based. It’s understood that members have civilian employment. It’s designed for that,” he says. “I consider real estate my primary employment.”

As vocations, they’re pretty much polar opposites, with real estate being entrepreneurial and the armed forces notoriously regimented. “I really enjoy the dichotomy of the two careers,” says Richardson. The skill sets for each actually have a lot of overlap, he finds, embracing competencies such as teamwork, discipline and time and stress management.

He got off to a sluggish start in real estate. (“I didn’t hit the ground running. I wasn’t very familiar with sales.”) But using his contacts within the military community as a foundation, his real estate career eventually took off, keeping him, Asadoorian says, solidly among his brokerage’s top 10 per cent.

“Real estate is really all about forming relationships and so is the military,” Richardson says. “I make a strong database. My primary focus is working my sphere of influence. I’ve had quite a bit of success with that.”

Asadoorian adds that both the military and real estate are about systems. “Good real estate agents have good systems,” she says. “Some people think they’re entrepreneurial, yet they struggle to get up and get to work every day. The military makes sure that no one is lazy. There is always a task to do…So when Mark finds a good idea, he simply gets to it – he gets up and gets to work. He doesn’t wait around for the phone to ring.”