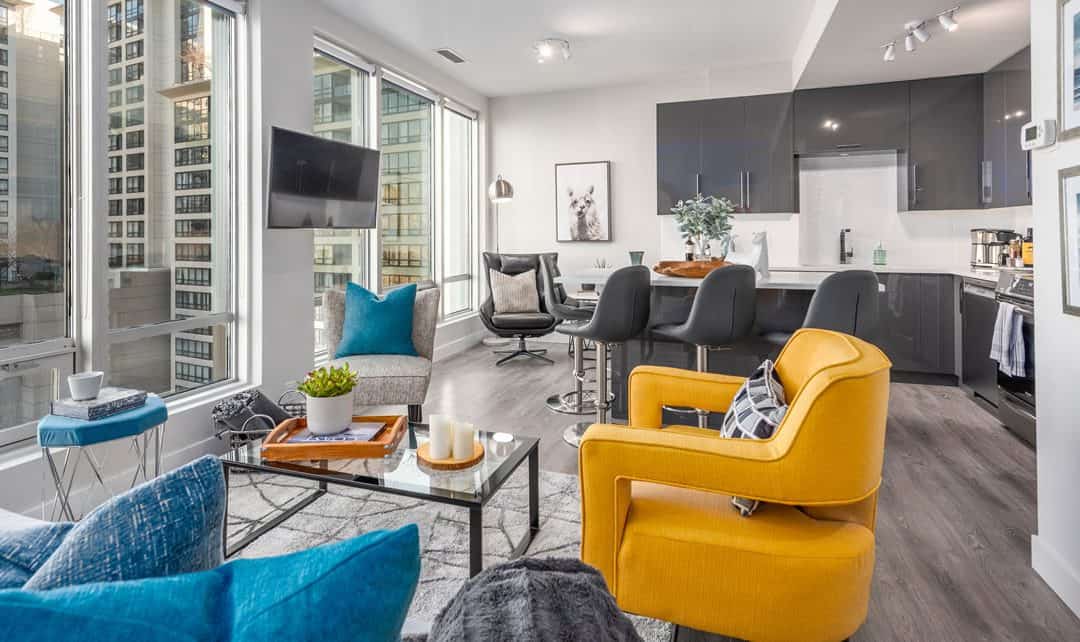 In Vancouver, Suzanne Rushton is a highly rated photographer with a passion to “raise the bar for real estate photography.” Recently, Rushton says a Realtor friend of hers was having problems selling a property. As a next step, “He had it staged professionally and then had me come to take photographs.” In short order, says Rushton, that once-stagnant listing flew off the market, $50,000 over asking to boot. “So there’s an actual case that shows that staging matters, and photography matters.”

It’s not exactly a newsflash that along with staging, photography plays a powerful role in promoting your listings and your business. Yet for real estate professionals, the expectations have ramped up twofold. First you need to keep up with all the trends and then decide how and where to best focus your time and money.

To get a sense of photography trends and best practices today, we talked to Rushton and successful Canadian Realtors in two of Canada’s largest cities. Here’s their advice:

The digital revolution has only made photography more vital, Realtors told us. We know, for example, that for most buyers going online is an integral part of their property searches. As a result, the role of visuals has morphed. Rather than simply documenting a home’s features, photos must grab the attention of buyers as they scroll.

In Montreal, Catherine Dawe, a broker with Keller Williams Urbain, agrees, stressing that professional photography is a must for property listings: “Visuals are the No. 1 way that you’re going to get people interested. That’s what we get paid for.”

And there’s also evidence to suggest good photos can speed up your sales cycle. One study by the National Association of Realtors Center for Realtor Development found homes with high-quality photography sell 32 per cent faster.

Strategies for standing out:

How to stand out? Salespeople looking to make a mark face stiff competition. “We’re all used to seeing visuals and the bar has been raised. Every year it seems to get higher,” says Rushton.

In Toronto, Melanie Wright, broker and owner at the Wright Sisters Group, says choosing a professional, engaged photographer whose style you like is a great start.

Sounds simple but surprisingly, Wright says she sees more salesperson smartphone shots than you’d think. “It’s sad for me to see a nice property get listed and they’re iPhone photos that the agent took at 8 p.m.”

To elevate your listings, Rushton says, “You don’t have to get a full set of images for everything – for a smaller property or on a fixed budget. But I do think it’s worth getting at least a few really good photos that draw people in.”

With bigger listings, Wright also advises asking the photographer to take any extra shots that might raise offers. If a property has public lane access, for example, Wright might ask for some shots of the garage area “so people can see they could create laneway housing.”

For physically outstanding properties, Wright adds aerial photography. “For example, we’ve had two lakefront properties in the Beach, and in both of those situations we used drone footage.”

When it comes to higher-end listings, salespeople might pay for HDR (High Dynamic Range) digital images, twilight photography or arrange Matterport photography to create 3D walkthroughs and schematic floor plans. Dawe says, “I had a photographer come in with a Matterport camera, and from that you can pull stills. It also takes all the measurements for me so that I don’t have to spend my time doing that.”

Video is increasingly popular for property listings and social media. Dawe says, “I will put together all of that stuff because some people like videos, some like to look at stills… These days, you really need to cover a whole gamut of different kinds of media.”

While she generally uses photographers for full videos, Wright says sometimes she’ll also shoot on-the-fly 30-second “coming soon” videos with her smartphone. “But we would never shoot a video just with the iPhone. We have a mic, we have a diva light…to make it somewhat professional.”

Another trend Wright sees is lifestyle photography and listing photos that include close-up shots of little details. “It’s zooming in on a beautiful marble countertop with a bowl of fruit, so using different images just to set yourself apart, that’s something we’re starting to see more and we’re integrating into our marketing.”

At the very top end, Wright also sees a lifestyles-of-the-rich-and-famous trend crossing over from luxury U.S. markets into Canada.

“It’s not unheard of for them to use models and horses and have luxury vehicles, Porsches and Mercedes, pulling up… It would be pretty rare for us to do that but if I had a luxury property I wanted to promote, that’s something I would definitely look at, depending on what my sellers wanted.”

Influenced by social media, Rushton sees real estate professionals revealing more of themselves, their team, personal interests and community life into their visuals and digital marketing. Head shots of real estate teams for digital platforms, she says, should be updated at least every five years and express personality. “But also have some lifestyles shots in there – ‘I have a dog. I drink coffee. I’m interviewing a client. I’m immersed in the city!’…People like to know that,” says Rushton, “because we all do business with people as opposed to companies.”

Putting together a lifestyle shoot doesn’t have to be complicated, she says. “Hire a photographer for an hour or two with your team or by yourself, have it planned. It’s almost like a dating profile to be honest, but it’s not. Take your dog to the park, get some shots. This is content you can use for the next several months.”

Ultimately, the key to success for Realtors seems to involve creativity, trying new things – trying lots of things – and being open to whatever can help them serve clients better.

As for what’s next, the industry is getting ready for virtual reality. Dawe says, “One other trend that Keller Williams has been talking about for a few years now is virtual visits, where people don’t even have to leave their living room – they can put on their VR glasses and visit a house… We’re not there yet. But that’s where we’re going.”